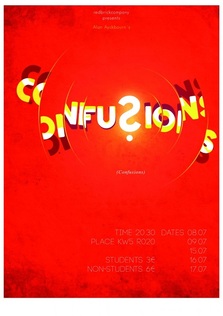 With Ayckbourn’s Confusions, the Red Bricks return to their origins: this was the group’s first production after its foundation in 2006.

Confusions, written in 1974, is a striking example of timeless drama, starting with deceptively normal everyday situations which develop into dark comedy or high farce.

The play consists of five loosely connected one-act plays – we will perform three of them this time: “Mother Figure”, “Drinking Companion” and “Between Mouthfuls”.