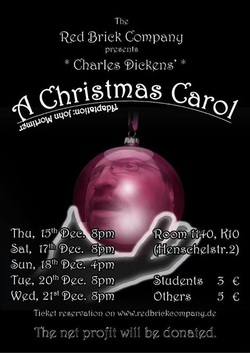 Charles Dickens’ A Christmas Carol has been adapted for stage and screen so many times that it has become a modern myth about the dangers of greed and the redemptive powers of charity.

Should anybody not know the plot – here it is: years after his business partner Jacob Marley has died Ebenezer Srooge is visited by Marley’s ghost who announces the arrival of three spirits that are supposed to teach Scrooge a lesson about the values that count in life.

As each spirit takes Scrooge on a journey he revisits the places of his childhood, becomes aware of the poverty and suffering in the world and is finally confronted with his own death. Through this shock of recognition the stingy old businessman is initiated to the true spirit of Christmas and turns into a model of benevolence and charity.

As usual, RBC have made it their mission to breathe fresh air into a literary classic. Based on John Mortimer’s modern adaptation we combine Dickens’ story with wild comedy, blood-curdling special effects and the most angelic and heart-melting carol singing you have ever heard this side of the North Pole.

The net profit of this production was donated to: