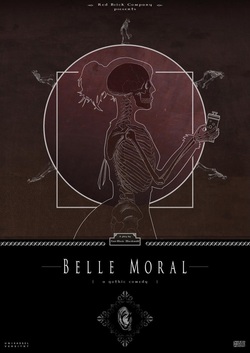 Scotland, 1899. Something is rotten on Belle Moral, the family estate of  the MacIsaacs. After old Judge MacIsaac’s death, his daughter Pearl, a young amateur scientist, tries to unearth a dark family secret which is kept from her by her conventional and superstitious aunt Flora and Dr. Seamus Reid, the family physician and evolutionary theorist.

How is the specimen of an ear, half human, half animal, which Pearl is given by Dr. Reid, linked to her family history? Why does the family portrait, which Pearl’s mother painted before her premature death, seem so strangely incomplete? Why does Pearl’s melodramatic, kilt-wearing and whisky-loving brother Victor suddenly develop a phobia towards dogs?

With Belle Moral, Ann-Marie MacDonald has written a gothic comedy which stages discussions on evolutionary theory, eugenics, and psychology and how they have shaped Western thinking since the late 19th century. But these issues are addressed in such a playful, imaginative and entertaining manner that one almost forgets the seriousness and scope of the play’s central concerns.