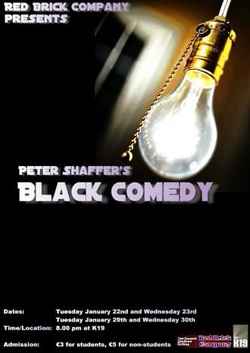 Peter Shaffer’s play, set in 1960 England, features the poor artist, Brinsley Miller, who wants to sell some art to a rich German millionaire. His fiancée, Carol Melkett, is a rather spoiled and silly girl who thinks it is a good idea to invite her father to meet her fiancé while he sells his art. To pimp his apartment, she had the glorious idea of borrowing furniture from the neighbour Harold Gorringe who is an antique dealer.

Things start getting bad when an electrical power cut occurs and neither matches nor candles can be found. The guests keep appearing nevertheless and even some people who were not invited, like the neighbour Miss Furnival or Harold, who comes back from his trip early. Another surprise visitor is Brin’s former girlfriend Clea, who slips in unnoticed and eavesdrops on the others talking about her. But everyone keeps waiting for Mrs. Bamberger, the German millionaire and the electrician from the London Electricity Board.

Characters are mixed up, alcohol is consumed and wild droughts are invented to keep everyone in the dark about the stolen furniture and the personal relations between Brin, Clea and Carol. Things get ugly when Clea exposes Brin’s intentions and when Harold figures out that his furniture has been stolen. Carol expects her daddy to stand up for her but his military resources seem to be a thing of the past. Can Brin save his ass or will he be smashed by the furious men?