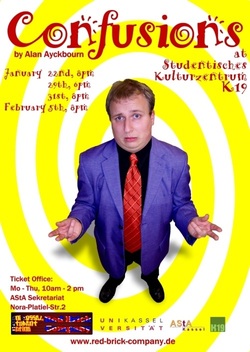 Maybe Lucy Compton had it all planned out before she got married: she would settle down with a devoted husband, have some adorable children and be the perfect housewife. But the reality of Lucy’s life looks different. While her husband, Harry, is away most of the time (possibly philandering?), she is stuck with the kids, who have become so much the sole centre of her life that she is totally obsessed with caring for them and doesn’t even bother with getting dressed properly.

When her neighbour, Rosemary, arrives with a phone number from Harry, who had obviously been trying to reach her but wasn’t able to contact her, Rosemary finds herself in a sitting room crammed with soft toys, pencils, empty plastic cups and left ironing. However, her attempts to communicate with Lucy and to get through to her fail; even Rosemary’s husband, Terry, who also pops in, is no match for Lucy. Rosemary and Terry may have their own relationship problems – with Rosemary being rather mousy and in-confident and Terry being a chauvinist slob – but Lucy soon straightens them out by talking to them in the one language whose absolute and possibly terrifying embodiment she has become: that of a mother.

Hence, while Rosemary and Terry are being served with orange juice and choccy biccies, they can’t help being sucked into Lucy’s mother mode, so that they eventually stop quarrellings and finally leave hand in hand – of course, after having said “Night Night” properly beforehand!

A Talk in the Park

There are four benches in a park and on each bench there is one person. But what happens if a fifth person is looking for a place to sit?

Well, Arthur decides to take a seat next to Beryl, a freak with pink hair. Although she is obviously busy with reading a letter from her boyfriend, Arthur won’t stop talking. Finally, Beryl gets up because she is so irritated by the people-collecting Arthur. Beryl goes to sit next to Charles, a business man who tries to work in peace. But now Beryl is the one doing all the talking and lets all her violent emotions out on Charles. He decides to move to the bench where Doreen is sitting. To her he complains about his work and gets really frustrated. Doreen doesn’t feel safe any more and decides to take a seat beside Ernest. He is a guy who wants to enjoy the quietness in the park, but Doreen can’t stop talking about her dog. Ernest feels interrupted and moves over to Arthur. But Arthur is more interested in women and does not want to listen to Ernest’s complaints about his wife and baby. So Arthur feels like talking to Beryl again… and everything starts anew.