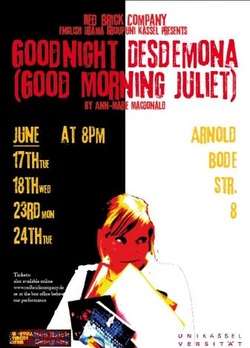 The life of Constance Ledbelly, assistant professor at Queen’s University, is a mess: her unfinished PhD project, in which she argues that Shakespeare’s tragedies Othello and Romeo and Juliet must be based on two older, unknown comedies, which she suspects to be encoded in an old manuscript, has earned her a reputation for being an academic crackpot. When her incompetent and narcissistic boss Claude Night, whom she secretly loves, disappoints her professionally and emotionally, Constance is on the verge of depression. But by an unexpected supernatural turn, she finds herself in a Shakespearean dreamscape and sets out to save the heroines Desdemona and Juliet from their tragic deaths, thereby re-writing the plots of Othello and Romeo and Juliet and coming to terms with her own life-story.