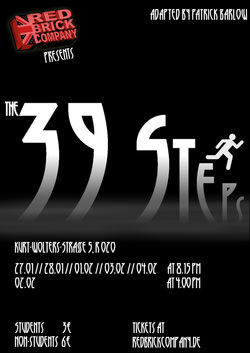 The 39 Steps is originally a spy novel which was written by John Buchan in 1915. In 1935, Alfred Hitchcock turned it into a successful thriller. In 1995, Patrick Barlow adapted the plot for the theatre, highlighting the comic potential of the original source that is already tangible in Hitchcock’s version. Barlow makes full use of everything modern theatre can do: actors play several roles, locales are changed rapidly and in mind-boggling manners, and special effects abound.

But what about the plot? Richard Hannay, good-looking, self-loathing and idle, meets a mysterious woman who tells him about a secret and dangerous organisation called The 39 Steps. After the woman has been assassinated by strangers, Hannay becomes a murder suspect and has to flee to the Scottish Highlands in search of the 39 Steps. He meets the enchanting Pamela who helps him to fight false policemen, aggressive sheep, mad German spies and his own world-weariness.