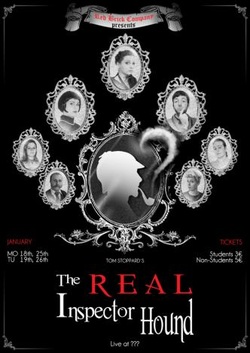 …is one of the many tricky questions that Moon and Birdboot, two theatre critics have to deal with while watching the performance of a whodunnit, caught up in a romantic love triangle, dead bodies and murderous intents.

The search for the murderer in their midst reaches even beyond the limits of the stage, and soon enough the two critics find themselves entangled in the web of a crime story and pushed into the spotlight of accusation.