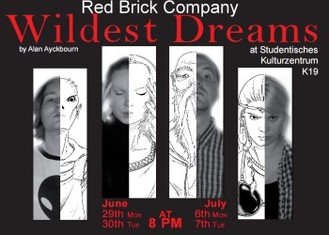 Stanley, Hazel, Warren and Rick meet once a week for a role-playing board game which lets them escape their troubles and anxieties. In their dream world they are allowed to take on roles which they are unable to live up to in everyday life: the wise leader, the young enchantress, the silent warrior and the far-sighted stranger, all united against their common enemy, Balaac the Beast.

Both their real and their imaginary worlds are turned upside down when young Marcie (aka “Novia, the Newcomer”) enters their lives and forces them to confront their personal demons.

Under Marcie’s influence their wildest dreams seem to come true - but in a manner which is completely and shockingly unexpected.

Wildest Dreams is a dark comedy with bizarre twists and one of Alan Ayckbourn’s best and most fascinating plays.